Angular’s HttpClient service enables communication between application and server by making an HTTP call to RESTfull API endpoints. In response, we get JSON data which is consumed to show meaningful content to users in client-side applications.

In this tutorial we are going to learn, how to use HttpClient service in Ionic 4 Application to make server HTTP calls with custom headers and propper Error Handling using RxJS operators. In our student application, we will implement CRUD (Create, Read, Update and Delete) operations to communicate with a Mock Server which we will build using JSON-Server NPM package.

Let’s get started with our step-wise tutorial!

Here we will create a new Ionic 4 Application a blank template using Ionic CLI tool with the latest version v5.2.4

Run the following command in terminal to create a new Ionic 4 application with a blank template:

For our Students application, we will create 4 new pages and delete Home page which is created by default with blank template.

Also, update app-routing.module.ts file to add the route paths for above new added components and remove home route as we don’t need it right now.

For making HTTP calls to the server we need to import HttpClientModule in application’s main module file.

Update the app.module.ts file with the following code:

Next, we will create a new service which will have methods for making server HTTP calls for CRUD operations.

In this service, we will also import HttpHeader and HttpErrorResponse class for manipulating HTTP headers and handle errors.

Also, create an Interface class for Students data by running following command defining the type of values for student item.

then replace the following content in the newly created file “~/models/student.ts”

To create a fully working Application, we will create a local running server by installing json-server package. Run following NPM command to install:

Create a new data.json file at the project root “~API/data.json” and replace the following JSON data in it:

You can run server response by running following NPM command:

In Create component template we will add a form to take Name, Age, and Address values from the user which will get submitted using submitForm() method.

Update student-create.page.html file with below code: 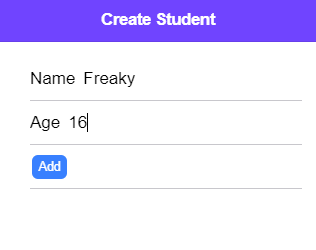 In the student-create.page.ts file, we will have the submitForm() method to call API service method createItem() to return an Observable. After successfully submitting value we will navigate to list page using Router service.

In list page, we will list all Students in our data.json file in a bootstrap table with rows iterating using *ngFor directive.

The table will also have an Action colum to show Edit and Delete buttons. In Edit action we are simply redirecting to Edit component with item id which we will update in later. The delete button will call delete method in our API service.

Replace the student-list.page.html file with the following code: 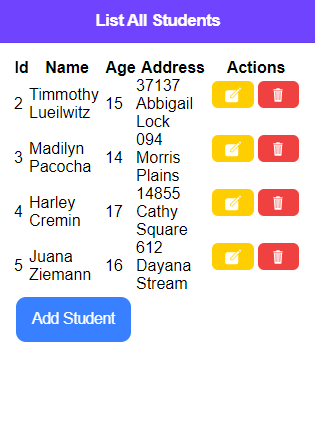 In the student-list.page.ts file, we will get the list of all students by calling getList() and also add delete()  to call deleteItem() method in API service.

In Edit component we will get the id of item using ActivatedRoute service then get its details. After that, we will show Form field controls to edit them, after that user can update the value to call the updateItem method in API service. 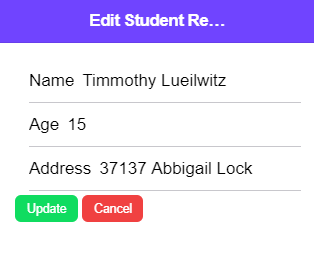 Don’t forget to run the json-server to up API server by running following command in a separate console.

If you are using Visual Studio Code terminal then you can hit plus icon to open a new terminal. 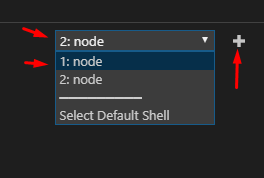 Conclusion: So here we create a demo application to show how to communicate with the server to consume RESTful API. We also created a Mock server with the help of awsome json-server npm package.

Connect with
I allow to create an account
When you login first time using a Social Login button, we collect your account public profile information shared by Social Login provider, based on your privacy settings. We also get your email address to automatically create an account for you in our website. Once your account is created, you'll be logged-in to this account.
DisagreeAgree
4
0
5
4

Connect with
I allow to create an account
When you login first time using a Social Login button, we collect your account public profile information shared by Social Login provider, based on your privacy settings. We also get your email address to automatically create an account for you in our website. Once your account is created, you'll be logged-in to this account.
DisagreeAgree
Subscribe
newest oldest most voted

where to create the API/data.json?