The cp is a Linux command which stands for copy, it is used to copy content from one directory to another. It is commonly used on Linux and other UNIX based operating systems.

In this guide, we will discuss how to force the ‘cp’ command to overwrite the complete directory instead of creating one inside it.

How to perform copy operation after Angular build is completed?

In the Angular project, during a requirement, I need to copy the dist folder to some other directory. But, this needs to be done immediately after the dist folder for the application is created.

Inside the package.json file you can have these scripts as shown below:

Above, we have added the "postbuild" script and updated the "build" command to execute postbuild.

Now, when you execute the "npm run build" command, it will copy the dist/my-app content into the one-step-back location ../deployment-folder/my-app

With ‘cp’ command you may face few issues which we are going to discuss.

While executing the "postbuild" command, you will notice an error in the npm command line saying:

“‘cp’ is not recognized as an internal or external command”

This is obvious to show up on Windows operating systems, as cp is a Linux command and Windows OS is not aware of this if you run on CMD Command Prompt or Powershell.

Solution: Use the “Bash” command line.

To tackle this issue on Windows, you can hit or run "Bash" to switch to Git Bash to execute the cp commands very easily.

Make sure you have installed and configured Git bash your system to use Bash command.

If you are using Visual Studio (VS) Code IDE, you can easily switch to bash using the + icon on the terminal console. 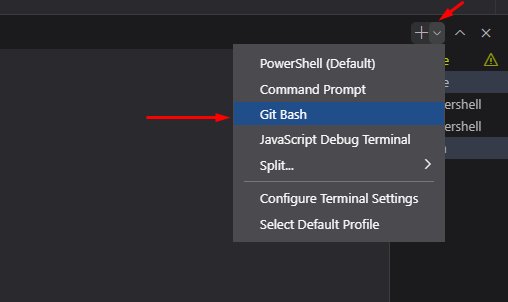 Issue 2) ‘cp’ command creates a new directory inside the target

If you want completely replace the existing folder with new files, then you have two options:

You can add -T flag so the command will become:

Now the complete directory and each of its file will replaced.

Options 2) Remove the current directory of the execute copy.

Alternatively, you can completed remove the destination directory before executing the ‘cp’ command as shown below:

The -f flag will forcefully remove the files and directories.

To sum-up this was a quick go-thorugh of a usecase while Angular development. Hope this will be helpful.

During android development, especially for a beginner like me the creepiest thing which I felt was Handling Contexts. Shared preferences is really a cool thing if we want to save some handy information by the user on a device even if an app is killed. BUT context exceptions are everywhere. So here we will not … RESOLVED! Shared Preference Context…

Dataflows in many forms. Someday I was about to transfer MySQL data from one of my servers to my local PC having PHPMyAdmin. On my server PC, I was having WorkBench. A WorkBench is a free tool to manage MySQL queries acts like a  relational database management tool. I took a dump of a database … [Resolved] When I faced…

In my previous post, we created a Google Map Static API image using a Get URL. In one of my project, there was a requirement of HTML conversion into PDF document. So I wanted to add that Map Image into that PDF document. I used html2canvas and jsPDF libraries for that. When I was trying to … Resolved! Uncaught (in promise)…

Last week my friend ordered RDP ThinBook 1130-ECW from Amazon. This is really a good netbook having the weight of 1.2KG and a configuration nice for lite office work. You can see this link and reviews, we will only discuss a problem I faced during installation of MS office 2007 and Open office in this … Resolved! – Error 1935.…

A few days back, I got two emails from Google Play Developer Support regarding some issue in two of my applications having the following content.

Today morning when I tried to open the Ionic Frameworks website, a strange message was showing up on screen “Your requested URL has been blocked as per the directions received from Department of Telecommunications, Government of India. Please contact administrator for more information.”

In this post, we will discuss an issue faced by many Ionic Framework developers related to getting the current page/ view/ component name in the application. In an Ionic application which using Lazy Loading to partially load components are facing such issue.

In Angular views for displaying object values in a list, we use *ngFor directive to iterate values. This directive takes out each row in the object and creates repetitive blocks of an element which is having NgFor.

During installation and adding the Android platform to your Ionic application you may face the following issue in your terminal window: