Yes! you read it right… with this simple tool, you can create a documentation of your Angular project automatically by simply running an NPM command in your CLI. This package creates complete project documentation in HTML format with an overview and detailed view of each component in the project.

As our application grows, it becomes difficult to keep track of each module and its components. The situation becomes worse when there is a need for giving project structure to co-team members or deliver code source and explain everything to other teams. During maintenance by other team members also slows down the debug or change processes.

So its always a better idea to keep a well maintained, simple and self-explanatory documentation at hand so that others and can understand and go through the structure with their own pace and conveniences.

Here we will get to know how to quickly create Angular project Documentation using an Awsome tool Compodoc.

First of all, we will create a new Angular Project using NG CLI tool and also add some new Components, Services, Directives, etc so that we can check how well Compodoc works!

Run the following command to create a new project with Routing and style option selected as CSS:

After creating application let’s create some components and services:

After running above commands, our files structure will look like this in VS Code:

Finally, we are ready to install and create documentation using Compodoc 🙂

Note: Please make sure the location of file “tsconfig.app.json” is available in src folder. If not then you need to change above command to this:

After running above command, we will have complete documentation under this folder “~documentation” at the root. It will have HTML files: 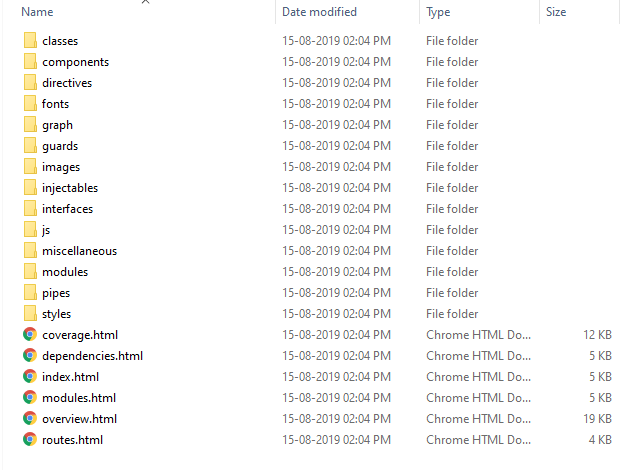 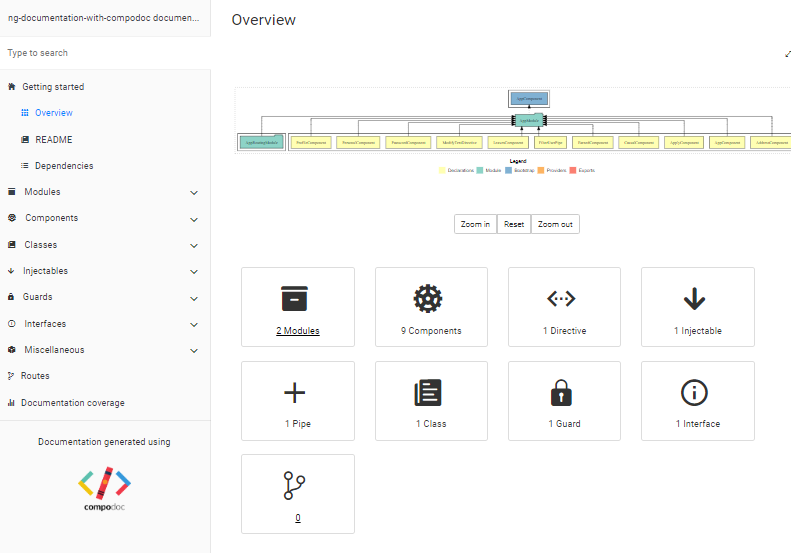 That’s it now you have good looking project documentation at hand with many features.

In this Angular 13 tutorial, you will learn how to make the API search calls to a remote server in an optimized way. By using the RxJS operators and functions we can minimize the number of API calls made to the server and same time improve the usability of the application by implementing the debounceTime, … Angular 13 How to…

In this angular tutorial, we will discuss how to create dynamic draggable grid boxes using the angular-gridster2 library in Angular application. A gridster is a UI component, having draggable and resizable grid boxes. Such kind of components can have multiple use-cases like sorting of items, solving puzzels, priortizing sections etc.

In this Angular tutorial, you will learn how to create dynamic FormsGroup in the Angular application. You will also get to know how to enable/ disable a section/ form group in a reactive form and dynamically add or remove form groups and controls. Using Reactive forms in Angular, we can create Forms with multiple sections … Angular 13 Dynamic FormsGroups…

Adding server-side pagination in the Material table using the Mat Paginator component. We will fetch the dynamic rows from the MySQL table and fetch them using the PHP file. In this tutorial, you will learn how to add dynamic pagination to load items for a page from a database on pagination.

In this Angular material tutorial, you will learn how to implement Dialog modal with an extensively used scenario tutorial with easy to go tutorial. You will get to know how to position a Dialog or display a fullscreen modal popup. Explore various events and popup hooks including after opened or closed callbacks. Passing data dynamically … Angular 13 Material Dialog…

Angular Image Slider Carousel Example with Zoom feature will be discussed in the upcoming tutorial. An Image Carousel or Slider with Lightbox effect shows a full/ large screen popup with the original image. That we’re going to discuss in this comprehensive tutorial by using the ng-image-slider library in Angular.

FullCalendar example tutorial in Angular. In this tutorial, we will discuss how to integrate the Fullcalendar package module in the Angular application and display dynamically created events on the fly.