By default, the environment/environment.ts file is picked, when we serve or build the Angular application by executing the below commands:

When we create the production version of our application by using the –prod flat, then the environment.prod.ts file is picked.

In either of the use-cases, the switching of environment.ts and environment.prod.ts file is decided based automatically. If we add the –prod then prod version picked by default.

How to Add New Environments into the Angular application?

In large scale enterprise applications, we may need another type of environment as well for example the test, uat, sprint etc. In that case, we can create more environment files and pick corresponding environment files based on the –configuration flag.

First, head towards the environment folder and create two new files in it named enviroment.test.ts and enviroment.uat.ts as shown below:

Next, in the angular.json file, look for the "projects.angular-your-app-name.architect.build.configurations" property. Here, the "production" and "development" properties are available by default.

Under the "production", you will notice the "fileReplacements" as shown below: 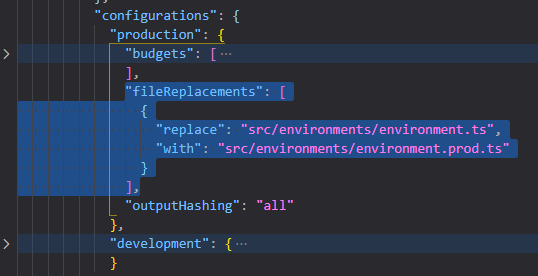 This does the replace of our environment files if running normal or prod build.

You can now run builds for the test or uat environment we just created above by adding the –configuration flag as shown below:

You can also update the scripts inside the package.json file. This is optional but preferred to add scripts which makes it easy to configure and use in the Jenkins pipeline.

Open the package.json file at the root folder and add following under “scripts” array:

We discussed how to add or create new build environments in the Angular application. Keeping different environments makes the deployment of multiple instances very quick and error-free.  This removes the extra efforts to replace certain properties and values required for a specific environment.