In this article, we will discuss the implementation of JSON Web Token Authentication in Angular 8 application by using angular2-jwt package.

This post is compatible with Angular v6+ and RxJS v6+

JWT or JSON Web Token is an encrypted string which contains information related to the logged in user and secret key, this token is generated at server end after a user is authentication. This JWT is used for further communication between clients and servers.

After getting JWT from the server, every HTTP call to RESTful APIs must have an Authorization header set with JWT, which is encoded at the server end for authenticating the source. After successful validation data is transferred.

In SPAs (Single Page Applications) like Angular JWT can be implemented very easy which will have a flow like this:

Step 2) After successfully authenticating the user, a JWT is generated and sent back to the client.

Step 3) Now client application needs to store the token received and send it in RESTful APIs as Authorization Headers, which will be decoded for verification at the server to process and return a response.

In Angular application, we can use angular2-jwt package to easily manage JWT after getting it from the server-side. This package takes all responsibility to attach Token in API calls and manages to check the timeout of a token.

For making HTTP calls to the server for consuming RESTfull APIs we need to import HttpClientModule in our application.

Navigate to app.module.ts file then import HttpClientModule from @angular/common/http package. After that add in imports array as shown below:

Above we also added FormsModule as required by forms on our Login page.

Next, we will create a common Auth service to keep HTTP calls separate at one place. This service will have methods for Login, Logout and fetch Private data by making RESTful API calls to the server.

Run the following command to generate a new Auth service under _service folder:

As you can see we also have an interface named user.

Run the following command to create one under _models folder:

In Auth service we have added some stuff, let’s quickly discuss that:

httpOptions: Option object to set HTTP headers.
handleError: Method to handle client or server errors, I got this from Angular Docs.

loginForm: Method for making HTTP post call to API with Email and Password information. This method will be called from Login page.

setUser: After successfully authenticating the credential server will return some more user info with JSON Web Token, which we will save in browser’s local storage to use later.

isLoggedIn: This method will only check if user’s token is set in localStorage.

logout: This method simply clears the localStorage and navigates back to login screen.

In Angular application, we can easily manage JWT token by installing angular2-jwt package. It includes many features which otherwise are required and takes much effort for custom development.

– No need to use Angular Interceptors to add JWT in HTTP headers.
– Easy and one place configuration.
– Whitelist & Blacklist URLs
– Custom header and auth schema.
– Token expiration and other callbacks.

The Login component will have login form which will return token from the server. After that user will be redirected to the Dashboard page and make a getData HTTP post-call from the RESTful API endpoint.

That request will be succeeded by the server after checking JWT Authorization headers in the call which are getting handled by the angular2-jwt package.

For UI styling we have added bootstrap.css file in index.html 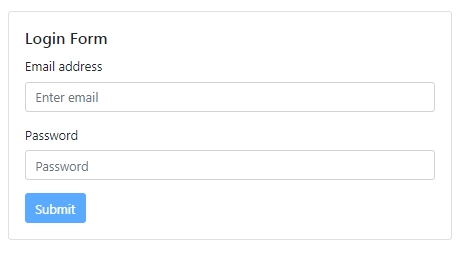 In the Login component class, we are calling the Auth service method loginForm on form submit:

After a successful login, the user is navigated to the Dashboard page. In the Dashboard component, we are making an API call with JWT token in Authorization Headers to get data from the database only after verification.

Later we will also discuss Server PHP code on how we can generate a token on login and how to verify on subsequent API calls.

Now replace below code in Dashboard template and Component class:

The dashboard will look like this after populating data from server:

Now replace the content of _guards/auth.guard.ts file with the following code:

As now we have guards to prevent Dashboard page access by a user without login in the application, finally out app-routing.module.ts file will look like this:

Now if you try to navigate “http://localhost:4200/dashboard” it will be redirected to the Login page if not logged in as there is AuthGuard. 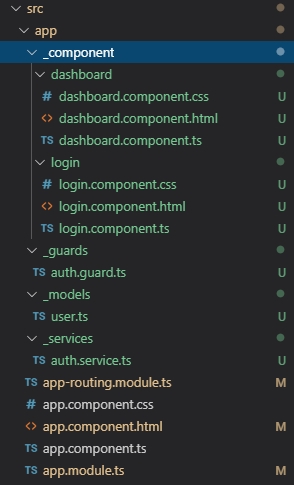 So up to here, we are done on client-side application implementation and usage of Token using angular2-jwt package in Angular 6+ application.

Next, we will discuss, How to implement server-side code PHP to generate/ encode JWT and also verify/ decode it to access private data which we did above. For that, we will use firebase/php-jwt.