In this Angular tutorial, we will understand Promises and how Promises work. We will discuss how to use ES6 Javascript Promises properly in Angular applications with examples.

As we know JavaScript is a single-threaded programming language, due to which it waits for a previous statement to execute before moving to the next task. To tackle this synchronous behavior, we have Callback functions that take a specific task and sit aside to perform program execution asynchronously.

Callback functions wait for an event to get called.  In complex applications with loads of interactions and data input-output operations, the situation worsens, resulting in callback hell due to the nested callback functions.

For modern applications, now we have ES6 Promises a solution to callback hell. These are more simple, better, and easy to maintain. In Angular 2+ applications, we usually use RxJS Observables which are far compatible with Angular Framework but Promises also getting more preference due to its latest upgraded JavaScript version supported by ES6.

Promises in JavaScript allow us to handle asynchronous operations. For example, we need to make an HTTP call to a remote server to fetch some data. As the completion of this HTTP, call depends on many factors and may take some time to complete, instead of waiting for its completion we can create a Promise and let the remaining program keep on running.

Promises are similar to callbacks and will let you know when data is fetched. But they support more features and methods to efficiently handle complex scenarios.

How to Create Promises?

An Es6 Promise takes an inner function, which accepts two parameters resolve and reject. When we execute a Promise, it gives us a surety that it is going to return us some value either it is a Success(resolve) or Failure(reject). That’s why we call them a Promise.

Have a look at the simple ES6 TypeScript Promise example.

Above we defined a Promise with new operator and passing the resolve and reject parameters in the inner returned function. In the function body, we put the asynchronous code like HTTP call or setTimeout function.

States of a Promise

Here in the example above, the isTaskDone is true, so after 1-second setTimeout the resolve() function will execute and return the string in it.

If something go wrong isTaskDone set to false or HTTP call fails due to network or server failure the reject() function will be called with the string returned.

We can return anything in resolve or reject methods like empty, string objects etc.

We can add success and error handlers with Promise. The Promise object can be used to handle Success and Error responses in the following ways.

Adding Success and Error Handlers in Promise using then()

We can catch the Succes(resolved) or Failed(rejected)  values inside the then() handler as shown below: 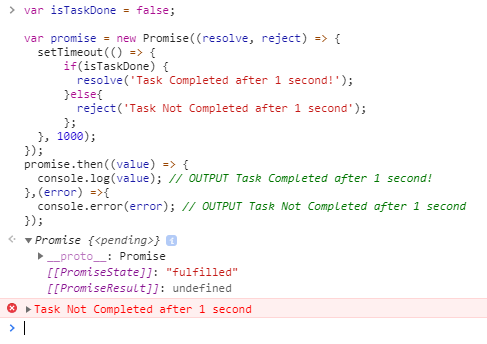 Here have converted the functions into arrow/ lambda notations.  After setting the isTaskDone to false the error callback in then() is executed.

We discuss how easily w can use Promises in Angular applications using ES6 TypoScript. Promises make Sucess and Error handling a lot easier. 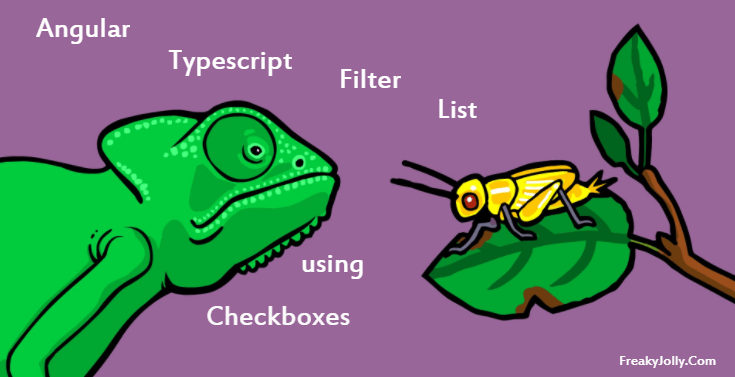 Compatible with Angular versions 2,4,5,6,7,8 & 9 Hi Guys, here we will create a list of items with a filter using Angular and Typescript. For filtering list data we will use Pipes. Features: Filter from the list using the input search form field. Use the checkbox to select a game from the populated list. Selected … Angular 9|8 + Typescript:…

Just simple quick commands to create an Angular 6 application. You can read more here. In this post, we will only do not that much reading.

Declaring a model value in the template, then passing it as a reference in method params, does not detect the updated model value; We are going to discuss this issue in detail and also the ways to resolve it with a simple use-case.

Image Carousels provides a good front-end user experience to show graphics or images in a small space in an interactive way. But in Angular Application we hardly find great carousels/ image sliders to work with. In this tutorial, we will implement a Great Simple and Easy to Use Angular Image Carousel.

In this post we’ll discuss on How to Create a Checkbox List having parents and children structure, using a single data object. Moreover, each parent is in an expandable accordion tab to be collapsed to hide its child items. The list checkboxes will have a child group and a parent checkbox each. Checking / Unchecking … Angular 12 Checkbox List…

Angular’s best feature is component. We can divide different modules into a number of components. Where each component having its own responsibility to perform. But, sometimes these components may need to communicate with each other and share data having each other’s dependencies. In this post, we will discuss a simple example app which will share … Angular 12 @Input Property…

Listing of items in data is a simple way to show items. If users have to select only a single Item out of it, we need to use radio input fields. here we will discuss the implementation of radio input list in Angular 6. We will develop a simple Angular application which will have the … Angular 12 Dynamic Radio…

Continuing from my previous post has an example of filter pipe usage in Angular application. Here we will upgrade that simple filter app to level next. I have upgraded this application to Angular v9, worked basically on two important methods using which we can pass data between Angular components.

In this tutorial, we will learn how to check all and uncheck all checkboxes in the checkbox list using a master or parent checkbox in Angular. We will create an example application demonstrating the check all uncheck all features.

Lazy loading is an architectural design which is popular these days among new technologies. This concept is mainly used in complex and data-intensive applications. In Lazy loading only that module or component is loaded which is required on that point of time, this makes an application very fast and economic on memory consumption factors.

yes! Angular 7 is here, In this post, we will discuss new CLI commands and start a new Angular 7 application.