What we are going to create?

Create an Angular 8 application which will have Nested Routing up to three levels. Each level of components has its own Router Module. We will also discuss How to use lazy loading concept in Angular 8 Routing to load components on run time when they are called.

We will create a demo HRMS(Human Resource Mangement System) application’s navigation structure. The first level of navigations will have following Tab links

Level 2: “My leaves” there are two links:

Two child component Leaves and Balance will have their own RoutingModule and Component module making lazy loading of these components possible.

Start with new Angular 8 application, create using Angular CLI handy useful commands to generate components and modules from CLI or you can use Stacblitz online IDE to create Angular app.

Here we will go with Angular CLI tool. Make sure you have updated the CLI tool by running following NPM command and you are using Node 10 or later.

After creating components we have the following file structure: 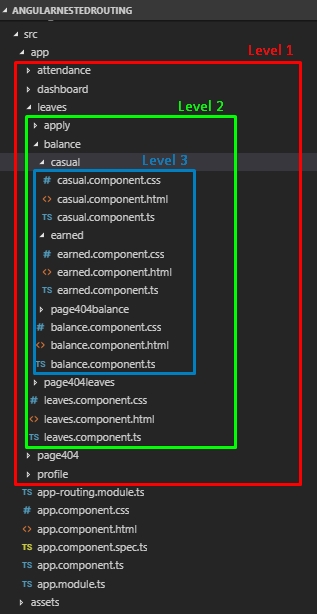 So,  we have components ready with one app-routing.module.ts file which was created by CLI at the root with the main navigation Routing path config.

Adding RouterOutlet directive at each level

By default, its added in the app.component.html file which is the main component of the application.

The routerLink directive is used in Angular template for navigation linking.

The routerLinkActive directive adds a specified class(here ‘active’) when that link is open in view. This directive is helpful in highlighting the active link.

Now for level 2, open the app/leaves/leaves.component.html file and replace with following HTML template code having routerOutlet and navigation links.

The third routerOutlet will sit in the balance component. Open app/leaves/balance/balance.component.html file then replace following HTML template in it.

The main concept of Angular application is its ability to remain modular and reusable, which makes each component independent and separate from the rest of the application. This makes reusability and maintenance of components very easy.

What is lazy-loading in Angular?

The concept of lazy-loading is proved very helpful in optimizing large application which scales to complex levels and has a number of components and level hierarchies in them.

Application without lazy-loading loads all components at once on initialization which makes application slow and inefficient in terms of memory usage.

Using lazy-loading components which are required are bundled and loaded runtime on request. The concept of lazy loading works on demand and supply scenario, keeps application light and optimized.

How to make a component in Angular a Lazy-loaded component?

In Angular application converting a simple traditional component into an optimized lazy-loaded component is done by creating its own module. For example for making leaves component a lazy-loaded one, add leaves.module.ts in it. Let’s discuss it in details further.

Let’s create modules for Leaves and it’s child Balance component. With Modules create RouterModule as these have subcomponents.

In the above command, m is for modules. The –routing option flag will create RouterModule as well.

After running above command now we have the following directory structure. 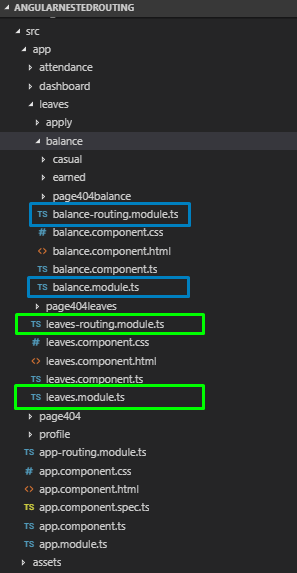 Leaves and Balance have their own module so we will add their child components in these modules instead of App main module.

You can check the previous post on how to setup Routing in Angular application here.

In above code, Routes are configured with and without lazy-loading. For leaves, we used the loadChildren property to define the path of the module which is to be lazy-loaded.

Here you may have noticed the new way of importing the module using import method to return module which can detect if there is an error on the imported module.

Before Angular 8 we used the following style, which takes the module as a string which lacks real-time error detection.

Other than these use component property which will simply load components on app load.

Basically in one line we can say leaves component handed its responsibility to its module then it will be used to load it and its child component defined in its module file leaves.module.ts

children property is having routes with path of child components. For balance we used loadChildren for lazy-loading its module.

Similarly replace the balance-routing.module.ts file with the following code:

Connect with
I allow to create an account
When you login first time using a Social Login button, we collect your account public profile information shared by Social Login provider, based on your privacy settings. We also get your email address to automatically create an account for you in our website. Once your account is created, you'll be logged-in to this account.
DisagreeAgree
6
1
8
7

Connect with
I allow to create an account
When you login first time using a Social Login button, we collect your account public profile information shared by Social Login provider, based on your privacy settings. We also get your email address to automatically create an account for you in our website. Once your account is created, you'll be logged-in to this account.
DisagreeAgree
Subscribe
newest oldest most voted

Awesome article, really helped me out. However I my app i decided not go with lazy loading since its rather small.

I also noticed that I was unable to make the root default path (path: ”) redirect to one of the child modules. To make this work I had to change the path from ” to ‘my-child-module-main-component’. In your case the parent path in the leaves module with be ‘leaves’ in instead of ”.

Hi, how to hide parent, when im showing childs ?

Great post! If anyone need to clone a working source code:
https://github.com/tuliomarchetto/ng8-nested-routes-lazy-loading

When I ran the above example it gave me and error:

Error TS1323: Dynamic import is only supported when ‘–module’ flag is ‘commonjs’ or ‘esNext’

But when I ran your application it was working fine. I wasn’t able to figure what was the problem but your app helped a lot.

COuld you suggest why my app wasn’t working. I downloaded the source code from the Stackblitz demo here:

Thanks so much. It help me a lot. Awesome!!

I’m trying do that but I have some question.

I did it like you and it’s working successfully but my project couldn’t find own javascript files when do refresh child page (runtime.js, vendor.js etc.)

Maybe you know where did do I wrong?

Thanks for good job!