Compatible from Angular 2 to 8

Datatable is popular among developers developing in web projects using the mainly jQuery library. It is a full package of many basic features like Pagination, Sorting, Filter search bar, etc.

In this post, we will implement this fully featured Datatables library in Angular project and discuss various options available from basic to advance level of Datatables.

Datatables is basically a jQuery library which we are going to use in Angular 2+ version with the help of Angular directives. So we will go through a three-step configuration process.

We will create a new Angular project using Angular CLI. Make sure you have Node 8.9 or higher and NPM 6 or higher installed as required by Angular Datatables we are going to use.

We will create a new Angular project using Angular CLI. Make sure you have Node 8.9 or higher and NPM 6 or higher installed as required by Angular Datatables we are going to use.

Using NG CLI we will create a new Angular

As Datatables is basically a jQuery library so we need to install its jQuery libraries and Angular directive in our project.

After installation of Datatable dependencies, import CSS and JS libraries in the angular.json file as shown below.

The last step in the configuration is to import angular-datatable package then add in imports array.

Use Datatables in Project

Finally, after the configuration part just start with the simplest example of data tables. Just add following HTML template in the app.component.html file then see a fully featured table. 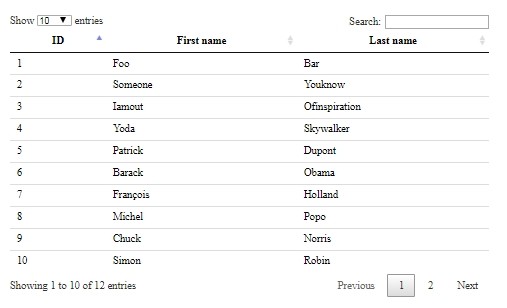 There is a number of options available in Datatables which make it very flexible and customizable according to needs.

Options can be passed as an object to a table in [dtOptions] attribute.

jQuery Datatable library for Angular is very easy to implement. It is tried and tested for performances a large number of rows. In Angular, this library can be very useful and to add some basic functionality in tabular data increasing user interactions and adding more convenience.